Skip to content
HomeTech$99 – that’s all the cheapest Windows 8 tablet will cost. 1.

A few weeks ago, we mentioned the forecast for increased tablet sales in 2022. One of the main features determining the purchase of this type of device is expected to be the price. It seems that in this respect the best performers are the various tablets running Android.

However, there is a chance that Microsoft, too, will benefit from the predicted "tablet boom" – it is to be helped by cheap tablets with Windows 8.1, and one of the cheapest will be the Kingsing W8. 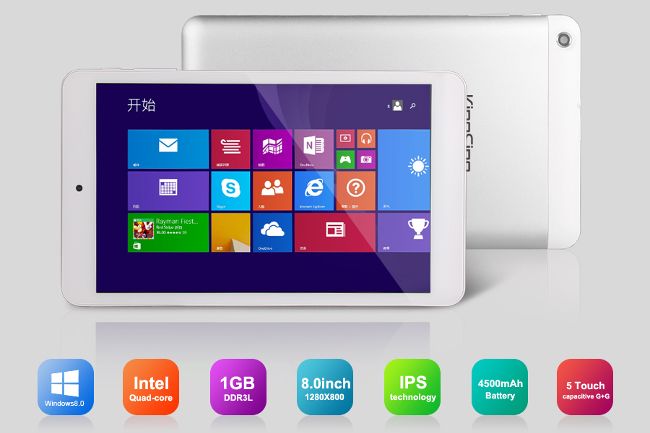 The price of the Kingsing W8 has been set at… 99 US dollars. This is very little. In Poland, the purchase of this device will involve the expense of about 450 PLN (after adding all fees).

Of course, purchase on your own, because it is unlikely to expect distribution of this Chinese tablet in our country.
What specifications does the tablet provide for less than a hundred dollars? It's worth looking into, because it turns out that a pretty good. At the heart of the device is a 4-core Intel Bay Trail-T processor, clocked at 1.8 GHz, it is supported by 1 GB of RAM operating memory.

8GB of built-in memory is reserved for data, and a microSD card slot is provided to expand the device's memory.

The tablet has an eight-inch screen with a resolution of 1280 x 800 pixels. There was no lack of a front camera for video calls. The number of supported communication ports also satisfies. Kingsing W8 allows not only connectivity via WiFi and Bluetooth 4.0, but it also comes with a 3G modem. The whole thing is enclosed in a chassis measuring 207.5 x 122.6 x 10 mm.

The manufacturer assures that the battery used, with a capacity of 4500 mAh, will allow the device to work for eight hours.
The specifications of the Chinese tablet, combined with its price, certainly encourage the purchase of the following. However, it should be remembered that The theoretical data for devices from the country of the Middle Kingdom, may largely differ from the final quality of the hardware. The low price must come from something.

Of course, such decisions as lowering the price of Windows licenses (such a step was taken by Microsoft not only for Windows Phone, but also for Windows 8.1 sold in tablets smaller than 10 inches), allow the launch of increasingly cheaper tablets with Windows 8.1. Nonetheless, production cost cuts are inevitable, so the Kingsing W8 may turn out to be hardware made of poor materials, plus lacking manufacturer support outside China.
Despite the above concerns, the performance of the discussed tablet is expected to be quite decent. The competition does not even come close to such a performance-to-price ratio, but for that it offers full support (it is primarily about service, warranty terms)… the question is whether this will convince people who expect, above all, low hardware prices?