eMarketer has prepared a report focusing on how video content is consumed online. Users are watching more and more video content and are increasingly using mobile devices for this purpose. Research on this phenomenon was conducted by eMarketer among Americans. The scale of this phenomenon is illustrated, for example, by the figures from 2011 and 2022. In 2011, an average of 95% of American adults spent their video viewing time in front of the TV.

A year ago, TV's share was already 83.3%, down more than 10%. The average adult watched more video content on mobile devices than on computers. 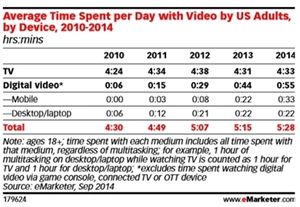 33 minutes with smartphone in hand

As recently as 5 years ago, basically no one watched video content online or did so very rarely. Since 2010, adults have been spending more and more time watching video on mobile devices every year. In 2022, they devoted an average of 33 minutes a day to this activity. 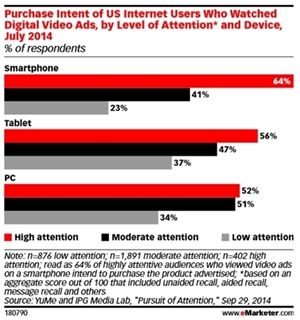 Knowing users' habits – when, on what and what they watch – is key to success in creating multichannel campaigns. More about mobile advertising itself was said in a Nielsen report released late last year. Also, the eMarketer report highlights the effectiveness of video ads among smartphone users.

It turns out that the device a person uses has a greater impact on the reception of an ad than the mood of that person or even the subject of the ad itself. This is because smartphones turn out to be the best at engaging the user's attention. They are followed by tablets and computers.

It's true that most video ads are viewed on computers, but it's the ones on smartphones that yield better results because they engage the attention of the audience more. Perhaps this is precisely because on smartphones ads have far less "competition," which may soon change when advertisers see the value of this channel.

Computers still in the lead 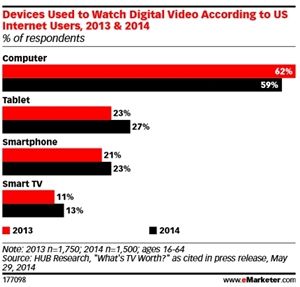 However, while users are paying more and more time and attention to their smartphones, they are still firmly focused on receiving video content primarily from their computers. It also plays a significant role during multiscreening. The number of views on mobile devices and on smart TV continues to grow, but the position of computers seems to be well established and they still dominate when it comes to receiving video content (TV aside). The number of video content viewers in America is estimated to exceed 200 million in 2022.

Meanwhile, in 2022, the number of "mobile audience" was expected to be 89.7 million. Despite the fact that the number of tablet users is smaller than the number of smartphone users, they gather almost as large an audience due to their mainly "entertainment" nature.