Skip to content
HomeTechThe mShopper report – Poles on mobile shopping, or a solid dose of knowledge about m-commerce.

Report: mShopper – Poles on mobile shopping, or a solid dose of knowledge on m-commerce

Allegro, GoMobi.pl and the Mobile Institute have joined forces to jointly create the report “mShopper – Poles on mobile shopping”. The report was released this month, and its issues focus on how mobile Poles shop and who the mobile consumer is. The mShopper runs to 105 pages and is filled with knowledge m.in.

About why we buy things searched in the store online and vice versa, and why mobile devices are a good glue between the offline and online worlds. The report includes reliable data and expert statements.
At the turn of 2022 and 2022, according to statistics, 44% of Poles used mobile devices, including more than 60% of Internet users. Behind these numbers, however, there is something more – „mobile” lifestyle. In the introduction to the report we can read that “Mobile is rather a lifestyle, a certain attitude that assumes activity, dynamism in action and awareness of various technological solutions that enable us to perform various activities“.

Natalia Hatalska also talked about the fact that “mobile is a lifestyle” during MTC2022.
The report consists of 10 chapters, also divided into subsections. Each of the chapters addresses a different issue regarding the shopping habits of Poles, placing particular emphasis on their mobile dimension. In the individual chapters you will find an analysis of the issue in question with detailed data on devices used, gender, age and place of residence.

The report also did not lack substantive commentary and expert opinions. Below is a brief guide to each section:

In the introduction we find experts’ statements about Poles’ mobile shopping. Natalia Hatalska emphasizes that there is a sizable group of consumers on the market for whom the mobile channel is the first, natural channel to access the Internet, What marketers and entrepreneurs need to keep in mind. 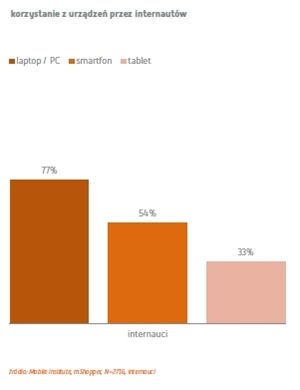 Almost 50% of Poles own mobile devices. They use 69% of Internet users. However, only about. 5% of companies have mobile sites. Internet users most often use laptops or computers (77%), in second place is the smartphone – 54% of Polish Internet users use it.

The countryside seems to be slowly catching up with the cities – smartphone penetration in the countryside matches that in medium-sized cities and metropolitan areas.

Poles’ shopping declarations prove that this year their spending on m-commerce shopping will certainly not decrease, and will even increase. Poles’ appetite for m-commerce is definitely growing.

In this chapter, the authors attempted to characterize the typical mobile consumer, i.e., an Internet user who indicated that he or she had purchased at least once in the past 6 months using a mobile device. How the data is presented? Mobile consumers compared to Internet users account for 24% of.

When making purchases, they usually use more than one device, which makes them more of a “multimedia” consumer. This group is decidedly younger than the statistical Internet user – the largest group of m-consumers is between 25-34 years old. Mobile-only shoppers are mainly in the 15-24 age group. Gender doesn’t matter – women and men buy just as willingly. Mobile consumers primarily reside in the largest cities.

They are characterized by impulsiveness – they are much more likely to make purchases on the spur of the moment. Interestingly, they are not too fond of shopping. This group is considered creative and enjoys out-of-the-box activities, they also like challenges.

Once again, the fact that mobile is first and foremost a lifestyle is confirmed.

Pros and cons of m-purchasing 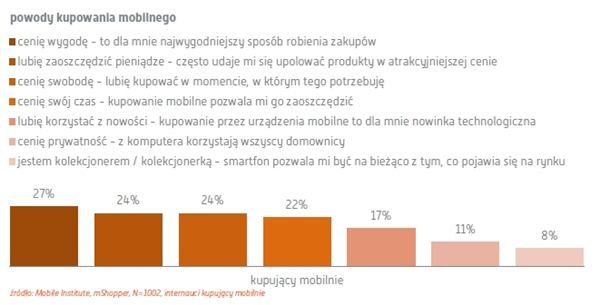 1/4 of Internet users do not shop online. They cite as motivation for their actions the lack of opportunity to “touch” the goods and the pleasure they get from standard shopping and walking around stores.
Mobile shopping is discouraged primarily…fear of novelty. Internet users who do not buy on mobile do not feel the need to do so (43%) or have a more convenient device at hand when shopping, i.e. a laptop or PC (35%). However, Internet users value the convenience and freedom of m-shopping. Mobile shopping also gives them the opportunity to save money. However, 14% of m-consumers experience difficulties with mobile shopping.

Among them are, first of all, difficulties in filling out forms, not adapted to mobile screens, inconvenient websites and applications, difficulty in comparing offers. Most of these mistakes are due to poor preparation of the retailer to accommodate the mobile consumer.

The chapter provides detailed data and charts on how consumers are buying – both e-commerce and m-commerce. It turns out that Mobile shopping is not very different from e-shopping. An increasing number of stores recognize the potential of mobile consumers, declaring that mobile shopping accounts for approx. 10% of their total transactions.

E-consumers are similar to m-consumers – they buy in similar places, spending a similar amount of money. Auction sites win the ranking, followed by online stores. Purchases are made most often in the categories of electronics, fashion and beauty, and culture and entertainment. 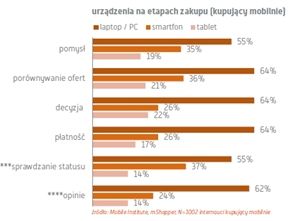 The statistical Internet user uses 1.6 devices when shopping. Migration between devices is a very common phenomenon. Mobile consumers typically use a smartphone or tablet during the 6-step purchase process. People who start the shopping process from a mobile device tend to migrate to a computer in subsequent stages.

This most often occurs during the purchase decision and payment process. A very large number of Internet users are also active in the post-purchase stages – e.g. checking order status. The chapter also presents the most popular shopping paths and consumer migration patterns to better understand consumer behavior.

It is also worth considering the number of consumers scanning QR-codes – they are scanned by 17% of m-buyers and 21% of only m-buyers. 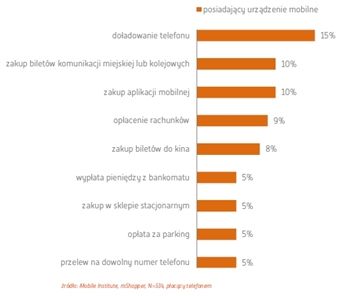 The phone is increasingly replacing the wallet. 40% of mobile device owners admit that they happened to pay with their phone. Most often these payments were made when buying phone top-ups or public transport tickets. 61% of m-consumers have paid by phone at least once.

They are also more likely to use their phone for everyday, non-mobile activities, such as paying for movie tickets or paying bills.