Skip to content
HomeTechWant to create a good mobile app It’s easier than you think!

You want to develop a good mobile app? It's simpler than you think!

Having a mobile site should be standard, but still many people wonder if it is better to create a mobile app. Many entrepreneurs struggle with such a dilemma, looking for the best solution for their business. Editor of MarketingProfs, Bob Moul, argues that mobile apps are the best choice.

Claims that they ensure greater customer engagement and strengthen brand loyalty. A well-designed app, once downloaded by a user, will keep reminding him or her of a particular product or service.
A challenge for small companies
Bob Moul is aware that while large corporations are great at designing and implementing effective marketing strategies based on mobile apps, small businesses may have some problems. He mentions the initial difficulty of choosing the right strategy for the development of a given app, which in the future will allow to increase the number of its users and maintain an adequate conversion rate, i.e. a profitable return on investment in general.
Way to succeed
However, small companies are not doomed to failure, and with the use of certain solutions can count on success on the scale of industry sharks. What solutions are in question? The main point is:

Contrary to popular perceptions, applying the above recommendations does not require a huge budget or a large number of specialists responsible for their implementation. Moul argues that any company can take advantage of them, all it takes is the right business strategy and choosing the right technologies.
You need marketers, not necessarily programmers
The development of a mobile application is not possible without the participation of developers, but the testing of the programs used and their improvement can be carried out by marketers. Modern technologies

Marketing professionals today have the ability to move corporate solutions into the world of mobile apps.
Bob Moul gives examples of A/B testing to help identify those "calls to action" (CTAs) that provide the highest conversion rate. He also mentions demographic studies, which test the reactions of representatives of given age groups to different colors, or analysis of navigation paths in the app, providing useful data on user behavior in different scenarios of behavior. The tools now available to marketers allow them to make ww.

Tests without the need for programming. Thus, small businesses and "laypeople" can afford to test apps, without specialized skills.
However, marketers should remember that they are not creating apps for themselves, but for customers. The important thing here is to make sure the right functionality or UX is tailored to the needs of the audience.
Mobile app – connecting the real world with the virtual world
What can ensure the success of a mobile application? The answer to this question is not easy, but many of the most successful apps have a certain characteristic in common. It is to connect the physical world with the virtual world.

Combining the program's functionality with consumer activity in the real world can ensure a brand's continued presence in its customer's lives.
Examples? Best Buy has decided to abandon traditional loyalty cards in favor of a mobile app. Another example is the recently unveiled app for Żabka stores – the app not only informs about current promotions, but allows you to create shopping lists or participate in a loyalty program.

Users receive daily suggestions created especially for them, and coupons from the virtual world can be used in the real store. 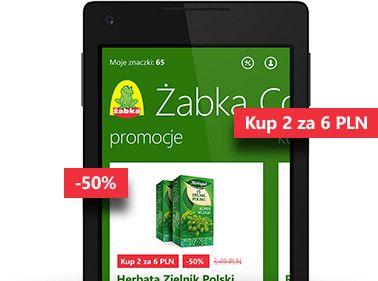 Moul believes that combining the world of mobile applications and physical reality has never been as easy as it is today. He points to a new Apple technology called iBeacon, which was implemented in iOS 7. Its purpose is to extend the geolocation capabilities of Apple products, by notifying apps when a user reaches a location with a mounted beacon. The project is also being developed by the Polish company Estimote.
The above-described technology can be used in stores or shopping malls, and the first tests (conducted, among others, by Timberland) give hope for its success. This is because it turns out that messages sent to consumers via beacon technology achieved as much as a 75 percent response rate.
Personalization can be profitable
Technological developments, particularly the Internet, have contributed to changes in many branches of marketing, and one of them is personalized marketing. Nowadays, companies can collect and process a lot of detailed data, target individualized advertising messages to specific audiences.
However, it is only with mobile evolution that company-consumer communication can have an almost personal touch. After all, for many of us, a smartphone or tablet is an integral part of our daily routine to a far greater extent than a personal computer or laptop computer. Mobile applications, like phones, can be always "at hand" and be a constant source of news related to a given product, preferably given in a specific way, tailored to the expectations of the device user.
How mobile apps can adapt to our preferences? Bob Moul cites several solutions, such as: