Skip to content
HomeTechMobile apps devour most of the time we spend on media.

Mobile apps devour most of the time we spend on media

ComScore has just released a report whose main motto is “The end of desktop dominance has arrived.”. We wrote about this yesterday with a chart illustrating the slow abandonment of PCs and the rise of mobile web traffic. In the U.S., the time we spend on tablets and smartphones is as much as 60% of the total time we spend using media!

This is a really impressive result.
We are all aware of the ubiquity of mobile devices. However, it is only when we look at the results of the survey that we realize that indeed – now almost all the media we used before now fit in the palm of our hand. Newspaper, book, TV, radio, game console – now we can find it all on a tablet or smartphone.

We find these media on our smartphone via apps. These are the ones that “steal” such a large percentage of exclusive media users. 52% of total media engagement belongs to mobile apps alone.

The first place on the pedestal of mobile apps is, of course, the app Facebook. Using apps takes Americans more time than using computers or surfing the web on a smartphone. Including mobile Internet usage, Smartphones consume as much as 60% of the time spent on media.

Apps take up 88% of the time we use smartphones and 82% for tablets.

1/3 of mobile users download at least one app per month. The average user downloads 3 apps each month. However, such an average is guaranteed by a very narrow group of 7% of users who inflate the statistics by downloading multiple apps per month. However, regardless of how often apps are downloaded, they are certainly used frequently. 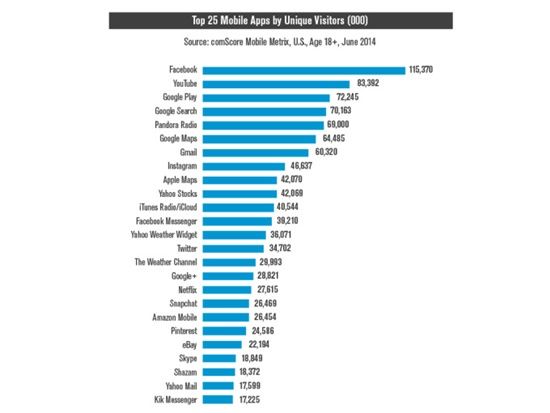 Nearly half, 42%, of the total time users spend on apps is spent on just one app. More than half the time is taken up by apps in the category social, games and radio. As a result, mobile app traffic is primarily centered around entertainment and communication. Among the 10 most popular apps are the following: Facebook, YouTube, Google Play, Google Search, Pandora Radio, Google Maps, Gmail, Instagram, Apple Maps and Tahoo Stocks. 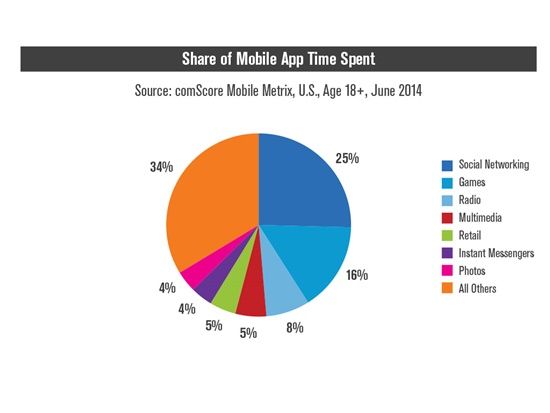